After the switch to KMEZ-AM in late 1982, the 1480 frequency continued with an easy listening format until September 28, 1989, when it flipped to KDBN ("Dallas Business News") as an all-business talk automated format.  (The KDBN calls were revived in 2002 for Susquehanna's 93.3-"The Bone.")  On September 4, 1991, 1480 returned to easy listening under the name KCMZ.  It remained under those calls and format until April 1, 1993, when Hispanic Broadcasting Corporation bought it, renamed it KMRT (later KDXX [on 2/20/1998] and KHCK [on 6/18/2002,]) and began simulcasting one of its local outlets to it, KHCK-FM, by August, 2002.  On March 30, 2005, 1480 was acquired by Salem Radio Network, renamed KNIT, and given a Southern Gospel format.  (In a strange coincidence, former KBOX jock and PD Ken "Great" Scott was on the board of Salem as a vice-president!)  By the end of 2005, Salem traded the station for a property in Florida, and James Crystal Florida Inc. became the new owner.  In June, 2007, the station became an affiliate of ESPN Deportes, the Spanish version of ESPN Sports, which lasted until August, 2009.  On July 23, 2011, KNIT-1480 went dark due to "repeated burglaries at the station."  While off the air, the call letters were changed to KBXD on February 17, 2012 (in deference to the old KBOX...as in KBoX Dallas.)  Records state that the station signed on for one day, April 16, 2012, and finally resumed regular broadcasts on November 26, 2012, with a gospel/brokered time format.

Owner Group One sold the AM and FM stations to DKM-Dallas Broadcasting on July 16, 1986, and DKM soon sold them to Summit Broadcasting in September, 1988.  Summit then traded KMEZ-AM to Gillmore Broadcasting for KHVN-AM (the former longtime KNOK-AM.)  So Summit's new combo consisted of 100.3 FM and 970 AM, while Gillmore's combo now consisted of 107.5 FM and 1480 AM.

Summit took ownership of the 9900 McCree building where, on Christmas week of 1988, they premiered the new Urban/Contemporary Hits KJMZ-FM, "100.3 Jamz,"  while Gillmore took the KMEZ calls and format to 107.5 at the same time.  KJMZ and KHVN stayed in Radio Park until 1990, when they relocated to 545 W. John W. Carpenter Freeway in Irving (and moved the AM transmitter from Radio Park to St. Augustine Road in SE Dallas.)  The Summit combo was subsequently sold to Granum on June 15, 1994, and became part of Infinity in March, 1996.  Infinity later sold KHVN to Mortenson Broadcasting in December, 2001.

The FM frequency is still under CBS ownership, and has been home to an assortment of trail-and-error formatting since.  On September 1, 1995, the station became KRBV, playing a slower mix of R&B.  By March 15, 1999, the station returned to an Urban CHR format under the same calls, and reimaged the station on July 1, 2001 as "Wild 100."  "Wild" saw two more reimaging attempts since, with no real change in format or moniker.  Finally, in 2005, programmers settled on the new "Jack-FM" format, and the station has found mild success with it.

A year after Summit and Gillmore negotiated the station swap in 1988, Gillmore had built new studios in a high-rise at 5956 Sherry Lane in Preston Center for their combo, which opened on September 28, 1989.  (107.5 and 970 had long been housed at 3601 Kimbo Road in Fort Worth since their KNOK days, but a fire had damaged the building beyond repair.)

KMEZ-FM at 107.5 continued in name and format through July 4, 1991, when it flipped to a "Classic Rock without the Heavy Metal" format as KCDU-"CD 107.5."  Three months earlier, Granum had bought both stations from Gillmore.  But after 16 months, the rock format was trashed...and the frequency was involved in another trade of sorts when the owner of 106.1, Gannett, dumped out of that station's Smooth Jazz format after five years to bring back their retired "Kiss" format to that frequency.  107.5 picked it up immediately and seamlessly on November 2, 1992, taking Gannett's call letters, music collection and most of 106.1's air talent.

In June, 1994, Granum purchased 100.3 and 970 from Summit...putting all the formerly-connected stations under one ownership.  They relinquished 107.5's and 1480's Sherry Lane studios in 1995, and moved them along with KHVN and KJMZ to the former KRLD studios at the venerable Maxwell Building, 7901 John W. Carpenter Freeway in Dallas (aka "1080 Metromedia Place," it was the former home to defunct KMEC-TV.  KRLD moved there in 1970, and had recently vacated the building for nicer digs at the new Ballpark In Arlington in April, 1994.) 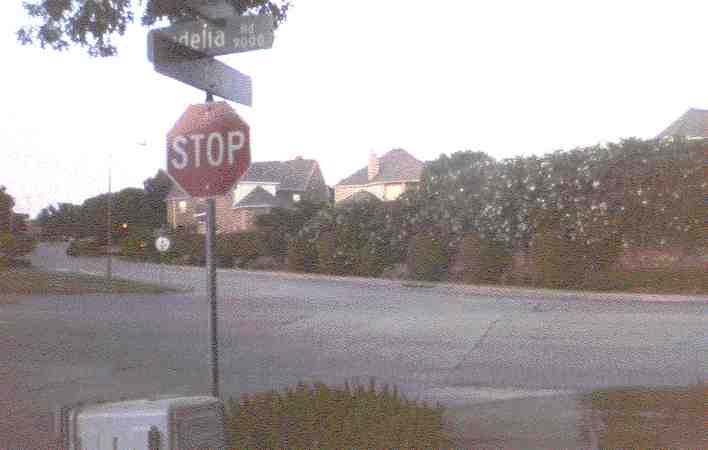 The 17 acres at 9900 McCree Road were sold to Centex Development, a division of longtime DFW home developer Fox and Jacobs, in 1991.  The studio and towers were demolished and removed, and luxury homes were built across the property thereafter.