Logo for the original Hi-Fi Club.

"THE HI-FI CLUB was a pretty simple, but very ambitious, idea. Kids love music and love to dance. Organizations, and parents, were looking for a way to keep those teens "off the streets" and out of trouble. Enter The Coca-Cola Company with a way to help both groups.

"THE HI-FI CLUB got its start in 1958. By June 1959, Coca-Cola bottlers in 47 states sponsored THE HI-FI CLUB, and its membership was estimated at almost 2 million teenagers.

"So just what was THE HI-FI CLUB? A dance club that would be supported and promoted by The Coca-Cola Company. Coke would turn to schools or any responsible group looking for a way to promote positive youth activities. Coke would supply the framework for a successful Club and the organization would do the rest. The most popular Club events were dances.

"With THE HI-FI CLUB, Coca-Cola started what was one of the first national dance clubs. Coke told the organizations how to set up and run the Clubs, and provided songs and ideas for each dance and event.  Membership was open to every teenager who wanted to join, with no initiation fees or dues required. Each member was given a membership card, and only members could attend events. Contests would be held at each local event, and prizes would be given on a local and national level.

"One of the most important factors in a successful Club was the proper disc jockey. Coca-Cola would supply the DJ with plenty of material, and the DJ was to learn about the product and its history. The DJ's name or image would appear on advertising and point-of-sales materials.  Coke provided the DJ with "The Monthly Disc Jockey Package" that included a record or transcription with the theme song for Coca-Cola, a series of special cuts containing interviews and programming from other Hi-Fi Clubs (there were breaks where the DJ could act like he was talking to others "live,") some other open-ended interviews where the DJ could pretend to be live with the artist, a segment called "Around the World Hit Parade," and a "Popular Records" set that included commercial recordings of artists who appeared on the program.  The DJ package also had scripts and commercials, which in total included over two hours of music and programming ideas." 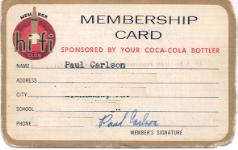 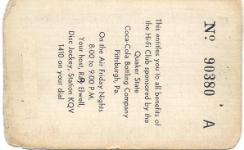