THE HISTORY OF
KDNT RADIO
IN DENTON, TEXAS
.
Sour Memories of my
First Real Radio Job!
By Mike Shannon, Webmaster
.
Like my radio friend, Mike Ehrle, I spent some time at KDNT Radio, but didn't enjoy my stay near as much as he did!  By the time I got there in 1988, KDNT-AM was on its last leg, pumping out Satellite Music Network programming during most of the week to an audience of perhaps one or two people!  I often thought to myself about getting on the air and asking ANYONE who's listening to call the station.  In fact, I took only one phone call during my stay, from a lady who wanted to know what a helicopter was doing flying over her house.

My impatient, anal-retentive program director took his job a little too seriously.  I just worked Sunday nights, after we cut the AM power down to around one-millionth of a kilowatt.  Still, the level of professionalism expected of me was intense, and, although I had reported news on the campus radio outlet in Denton for a little while, I was overly nervous about jumping into a REAL station.  I'm sure the world of automation is not a good way to get indoctrinated into a radio station environment, as I was left to work out all the logistics of commercials, programs, newswriting and newscasting, etc.  I had never even timed myself reading!  Nevertheless, the PD expected perfection, and I tried my best to oblige.  It didn't work.  Here's my harriedly-assembled 'cheat sheet' for programming a Sunday night in 1988:
. 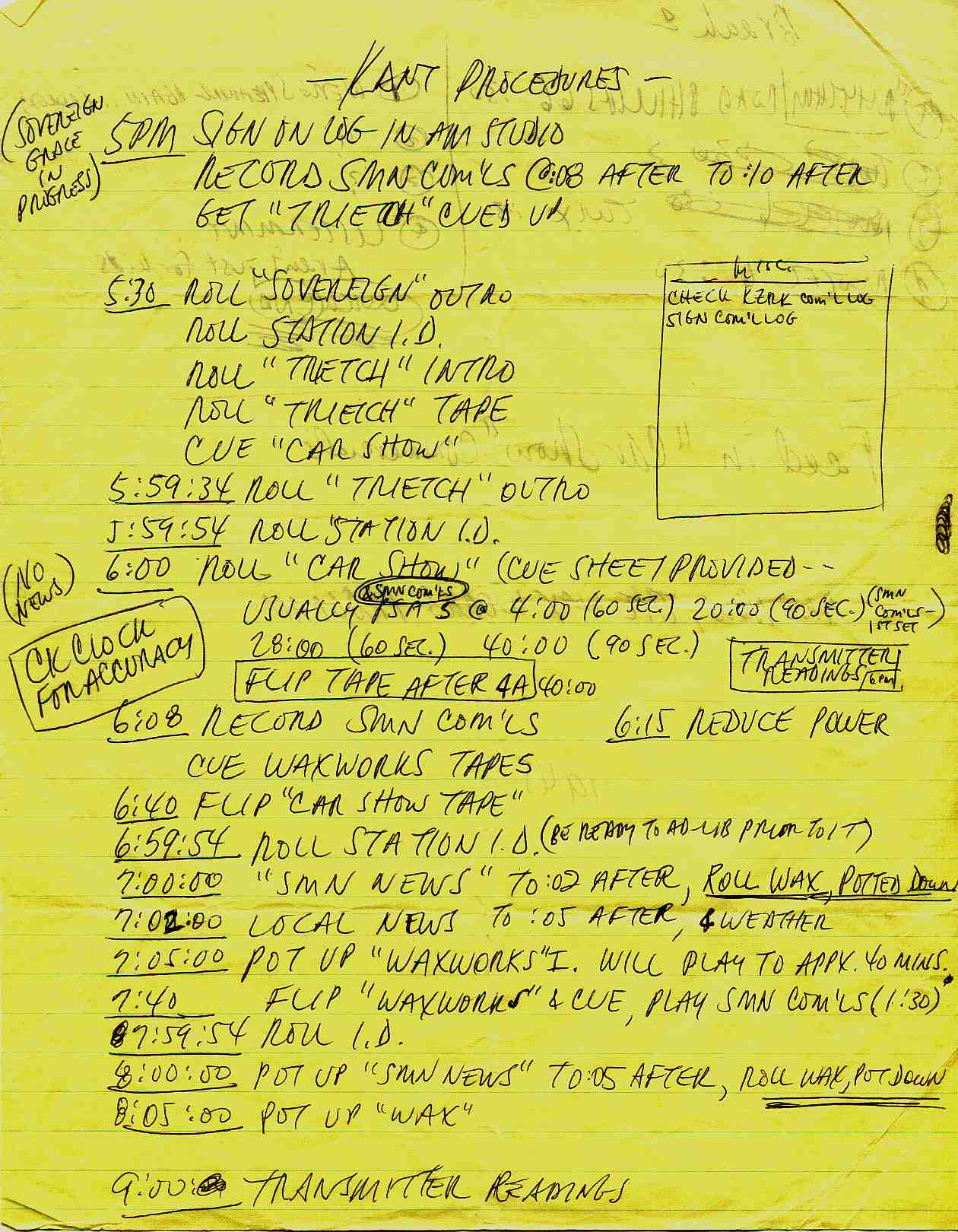 .
I first had to find the commercials to run; we were on carts still and they were always scattered around.  Then I had to throw together three minutes of local news off the wire (what would ever be on the wire about Denton, TX???)  and rattle off a weather report.  Between times, I had to check on the fully-automated KZRK-FM "Z-Rock" in the next room to make sure the feed was still live and the huge, old SMN 'carousel' cart-changing machines were doing their thing during commercial breaks.  An emergency hard rock album was left cued-up on a nearby turntable to play in case of satelllite signal failure!

One night, Brian, the PD, stayed around for a while to do paperwork.  He came charging in about five 'til 7PM, and told me to throw together some news for the 7PM slot.  The past few weeks, I had filled that time with commercials, per his orders, so forcing a first-time newscast on me with no notice was, honestly, pretty damn scary!  As I scotch-taped some various wire reports together and got re-seated and ready to go on the air, he came running into the tiny studio and told me we had to cram in some commercials around the newscast.  While I'm nervously counting down the seconds until my cue, he began this frantic swapping of reel-to-reels right next to me, slinging tapes, bobbing around, cussing the machine, bumping into me and my chair, and trying to cue up a reel through the speakers (instead of using headphones.)  Mind you, this room was about 25 square feet, and one person in it was too many.  Already very nervous at this point with all the franticness and noise going on, my cue came, I 'potted up' the mike and....FROZE!!  I couldn't speak.  I couldn't do anything!  It took a few seconds for the PD to realize what was happening.  He glared at me and kept shouting in a whisper, "READ!"  "JUST READ!!"  It didn't help.  I got out a couple of, "uh....uh"s and finally got my bearings after about 30 more seconds of dead air and started reading off the news.  I didn't keep track of time or anything.  I finally got through it, turned the mike down and the satellite feed back up.  Hoping for a little compassion, I was disappointed.  "What the hell was that?" I think he shouted.  I told him he got me 'all nervous' with his jumping around and creating havoc in the studio when I was about to go on.  He went on and on about what I had done, and then chastised me for reading the news too long!  From that point on, I could never do anything right in his eyes.  If there was any confusion about this job being a place for me to learn the craft, it was resolved that night.

The next week, there was a problem with one of the prerecorded, lame programs I had to run on my shift.  It was called "Wax Works."  One of the cassettes kept having this 'warped' sound.  The music portions of it sounded like a warped record.  Well, there was no procedure in my little handbook to cover this occurrence, so I let it run, figuring it would either straighten out or I could make it to the next tape and have better luck with it.  Instead, I get an angry phone call from the PD telling me to throw it into satellite immediately and forget the program.  You know, a college kid of 23 doesn't have the best judgment skills yet, so what was I to know?  The following memo was left on my chair when I came in the next Sunday:
.

.
"Not acceptable"???  Thats's one of those phrases that makes me cringe with anger.  (By the way, this guy typed EVERYTHING...I never saw his handwriting on anything; even on a post-it note!)  That was the icing on the cake for me, not to mention his allusion to the "dead air" issue in the memo, that I hoped had been put behind me now after two weeks!  I finished my shift, went in a few days later and dropped off a letter of resignation.  When I went to pick up my last paycheck, the PD approached me and said something like, "I don't think I'm that much of a tyrant to work for."  I didn't even say that!  I might have alluded to that in the note (ha) but I recall being very tactful, and blamed myself for my shortcomings and inexperience on the job.  It's not like I didn't tell him up front of my lack of skills when I hired on.  A little patience with me would have gone a long way.

OK, so that's my story.  Maybe it was a hasty decision to quit, maybe everybody in broadcasting went through something like this when they started, who knows?  In retrospect, it was simply the wrong place to start out.  I was trying to learn, and it was an environment that just didn't foster that.  But it's those small-town stations that serve as a training ground for beginning broadcasters to get experience, right?

Of course, that's my side of the story, though I've been as objective and honest as I can be!  I'm sure it's been long-forgotten by the PD, who probably couldn't even recall my name today if asked.  I daresay that others who worked under him might have similar stories to tell!

Today, Brian is a news director for an AM station outside of Texas.  As for me, I finally got over those jitters 15 years later, and performed over 30,000 traffic reports over WBAP-AM and WFAA-TV from 2003-09, with nary a pregnant pause or a stumble.  I can even ad-lib a little when needed!  I also took on hosting duties for a radio show, "The Hi-Fi Club," in 2006, which is still running today.  Honestly, I never pictured myself EVER being back on the air after KDNT.
. 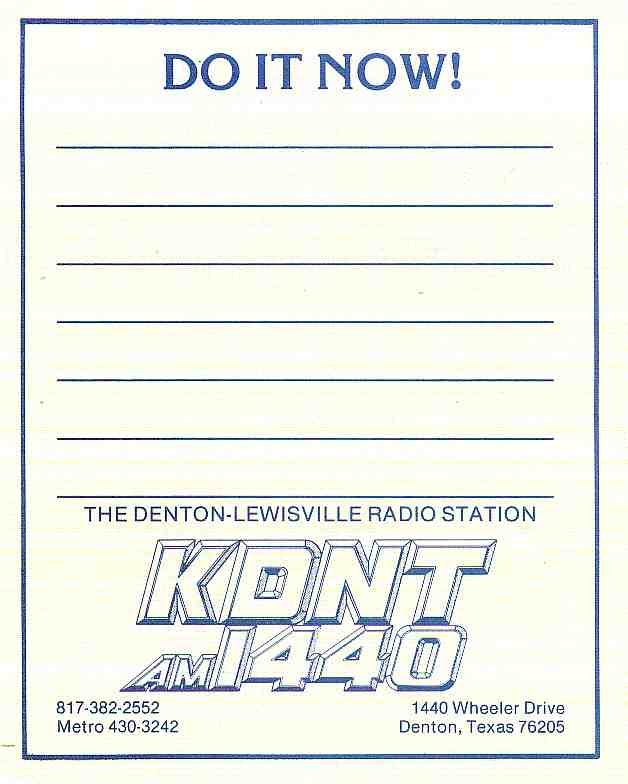 Lots of these notepads lying around the station back then,
as they didn't fit very well into a typewriter!!
.
"We are not interested in suicides or bomb threats"
.
Perusing my old KDNT procedures manual (consisting of about 10 typed pages, all written by the PD in the same impatient tone, including many references to what is "not acceptable,") I found that news reporting at the station had its limits.  "Remember to only report on stories that are of a serious nature," it reads.  "We are only interested in murders, serious assaults, major structure fires, all plane crashes, only fatal car accidents, and all hostage situations.  We are not interested in suicides, bomb threats, minor house fires, minor assaults, domestic disturbances, etc."  Whew, glad to know that bomb threats are not serious.  Oh, there were a couple of exceptions, such as if the mayor committed suicide or was assaulted!

Bad weather was treated in much the same way.  First, a great reminder to all broadcasters, "Our responsibility is to get the information out in a calm, professional manner.  Report the information you have without getting overly dramatic.  Let the situation speak for itself.  If it's a dramatic situation, you will not need to add to it."  I could picture myself calmly 'potting up' the mike, and saying, "The roof has just blown off the station, but I'm not allowed to overdramatize the situation.  Please tune to another station for updates.  We now return you to important satellite programming."

I think these edicts underscore what Mike Ehrle mentioned in his article about the early days of KDNT...a loss of local flavor after the stations were sold in 1972.  KDNT was not a rimshot contender in the Dallas market, but in 1988, it was vaguely treated as though it was.  One would think local people would want to know about local events and calamities, regardless of size or perceived importance.  Denton's own representative in the radio world fell short of that, and now Denton has to rely upon its campus station or Dallas stations to cover its news.